I recently lost my cat, Sancho, on January 7, 2014. I thought I should write about him, to show how much I care about him.

He’s been with me every year of life, my mom got him four years before I was born. I use to love saying that he was a fat, cuddly, old cat. Which, if you’re wondering, he was “fat”. In reality he was just very large and a little over weight. He was always there, if I was ever upset he would make me feel better. I know this is short, but it’s just too hard to explain how much I love him. 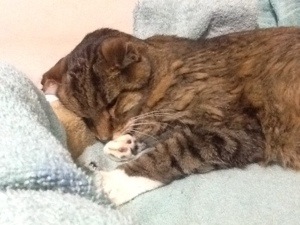 So, it’s me again, I know, didn’t expect that right? Well, as some of you may know I have a very old cat that is 17-18 years old. We took him to the vet because it looked like he was having dental problems and he wasn’t eating. Well, they examined him and ran a few tests. They found out he had kidney failure. I was heart broken, two years ago we lost his sister, Hannah, to kidney failure too. I didn’t know how to react, to just start crying or put on a happy face for Sancho so he wouldn’t be more anxious than he already was. The doctor told us that he would need an IV every day for about a week, and I would be the one to do so. She showed us how we would lift up the skin on the back of his shoulders and stick in the needle. In case you don’t know an IV is a needle that is attached to a tube that is attached to a bag of something. It is to get extra fluids to a patient if they need it, I’m sure everyone has seen what one looks like on T.V. I absolutely hate needles but this didn’t faze me. I guess it’s because I realized that if I was going to be a vet, I would have to get use to putting them inside animals. We put Sancho in his little box with a bed on the bottom and brought him home.

It was a few hours ago that I gave his IV to him. It was strange not having the vet there, it was like it was harder to do so. I guess that when you have someone that had done something a million times they make it seem easy so you can do it. But when the time comes for you to do it alone you realize it is harder than you initially thought. I realized this after he got the injection, it was like most things. Like when you see an actor perform on stage it looks like fun, but if you have to do it yourself it’s the most terrifying thing in the world. Then, when it’s over you realize it wasn’t that bad, and you improve the next time you do it.
Well, that was my experience, so next time you get stage fright, or you get scared of something… Just face it and you’ll realize that it’s not as bad as you thought.